Here’s a list, in more or less chronological order, of the dye mushrooms I find in my forest “backyard.” I live in the rainforest on British Columbia’s Sunshine Coast, which is a 40-minute ferry ride and a world away from Vancouver. The forest is predominantly Douglas fir, hemlock, and red cedar, with scatterings of broad-leaf maple and red alder. A band of arbutus (madrona) can be seen skirting the hills where altitude and conditions are right. Moss, ferns, and salal fill in the undergrowth spaces. Despite the green lushness of the setting, the forest gets scarily, crunchily dry in the summer months, when we can go for weeks or even months without rain. So we look forward every year to the autumn rains, when our world again becomes green and fresh and the mycelium reawaken with the promise of another glorious mushroom season.

This isn’t the greatest dye mushroom in terms of brilliant colour, but it starts to make an appearance in July, signalling the beginning of another season, so I’m always happy to see it. I learned from early experience that the buttons give very little colour at all, but if I let them age in place until they’re dry and rusty brown, and if I collect enough of them (five or six times the WOF [meaning the weight of the dried mushrooms is five or six times the weight of the fibre before dyeing]), I’ll get a pleasant peach shade.

When I first learned about this mushroom, it was classed as a Paxillus, so I still refer to it by its familiar nickname, Velvet Pax. It’s an easy mushroom to identify because of its brown velvet stem and the cap that grows off centre, with inrolled edges. I find it on rotting Douglas fir stumps and logs; sometimes it appears to be growing out of the ground, in which case it’s actually growing out of a root. I’ll find a few early specimens in July or August, but they really come into their own with the fall rains. Slugs seem to find them irresistible, so if I find a button that I can come back to in a few weeks, I’ll pack dry ferns and little sticks around it, to give it a chance to grow.

This gives me a rich grey, purple if I’m lucky, and greens and browns with other mordants. 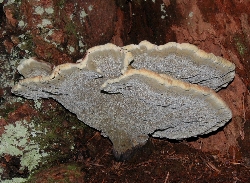 This is my reliable, old favourite—it always appears in great numbers, no matter how the rest of the mushroom season is going, it gives great golds, greens, and browns, and it works fresh or dried. It’s a polypore (literally having “many pores,” from which it releases its spores, as opposed to having gills on its underside.)

I find these on stumps and logs of Douglas fir, sometimes growing on the tree’s roots (in which case it appears to be growing out of the ground), and sometimes on living trees. The latter is fairly rare, although I do know of a few trees that sport Phaeolus twenty or thirty feet above the ground—these trees are always huge and have seen many years of the world passing by.

Sometimes I’ll pick a good-sized button, guaranteeing a bright gold dyepot; other times I’ll keep on eye on the fungus and let it grow larger. Occasionally, if the stem is strong and it’s early in the season, I’ll cut off the top “tiers” and let the stem produce more. And sometimes I’ll find an enormous specimen, which I assume indicates a long-lived organism that’s been feeding off the wood for many years.

These are perennials, meaning the fruiting bodies die back each year, only to reappear on the same tree or stump year after year until the wood has no more nutrients to give. If you see an old, papery, dark brown Phaeolus with a scurfy brown underside, it’s too old for a decent dyepot, but chances are you’ll find a fresh one in the same area the following season.

The colour from this one isn’t brilliant—resembling the buttery yellows one gets from many grasses, leaves, and flowers—but I always welcome their appearance, usually in early September, because of the special story behind them.

In this area they appear in clusters on dead alders, standing or fallen, sometimes in huge numbers. I’ve learned that they’re best prepared fresh for the dyepot, although they can also be used frozen. I’ve tried drying them, with poor results. I even tried keeping the dyebath outside in the cold for a few weeks, also with poor results. A special little mushroom nonetheless.

This striking mushroom is the result of a fungus growing on another fungus, in this case Hypomyces growing on a Russula brevipes. (R. brevipes is apparently British Columbia’s provincial mushroom, though why the Powers That Be chose this one is difficult to comprehend. Why didn’t they choose the Lobster instead?) The Hypomyces distorts its host, at the same time giving it a crunchy texture—did I mention this one is also good for the cookpot?

This is the one dye mushroom that my dearest, the house chef, and I have to share, but that’s not as contentious as it sounds. That’s because only the orange “skin” of the lobster is usable in the dyepot, as the white flesh would absorb much of the pigment if the entire mushroom was cooked. So I spend many autumn evenings with bags of lobsters and a paring knife, carefully peeling away the coloured bits and leaving the good parts for the kitchen.

It’s impossible to miss these. They push out of the forest duff already formed, like huge orange fists. They do tend to get buggy as they age, and stinky as they age even more, but what are a few bugs and a bit of stink when the prospect of a gorgeous red is involved? Let them age even more and they turn into a malodorous mush, but even that is desirable: the colour deepens, and this transfers onto the fibre being dyed.

This beautiful coral fungus gives purple, a royal colour in most cultures because it’s so hard to come by in nature. The purple can be hard to come by in this case, too, but not impossible. (And the mushroom dyer shouldn’t expect a deep purple from this—so far I’ve managed to achieve a deep mauve and sometimes a dusty rose.)

It generally appears later in the season, and I find it in all sorts of terrain. It’s best used fresh, or if that’s not possible, frozen while fresh. Dried coral just doesn’t cut it.

These mushrooms release their spores through little spines, or “teeth,” on the undersides of their caps. I’ve lumped them in the same category because they give the same colour: a beautiful blue-green. Processing in a high-pH dyebath (~10) helps them release these pigments.

I don’t usually find these in great profusion, and when I do, they’re growing in moss under Douglas firs or in the drier duff around cedars.  Their stems are tough and fibrous, so a serrated knife is best for cutting them off at ground level. I generally collect and dry them throughout the season, then process a few large dyepots over the winter months.

H. aurantiacum have a fruity, fresh scent, and their stems are orange when split apart (aurantii means orange in Latin). H. caerulean, when young, have smooth, pale blue tops. H. peckii, when young, exude red droplets on a white background, hence the common name Strawberries and Cream. The caps of all of these, as they age, thin out and turn dark brown, so it can be difficult to tell them apart at that point.

These toothed fungi might be mistaken for Hydnellum, but they are smaller, more fragile, and have white spore prints (Hydnella have brown spore prints). Varieties of Phellodon are often so similar as to be almost indistinguishable, especially when dry, but they can be combined in the same dyepot, as they give a similar colour: blue. They’re treated in the same way as Hydnellum—cut into pieces, soaked, and cooked at pH 10.

This unassuming mushroom can resemble a bolete when it’s first emerging from the forest duff (-opsis means resembling), with its rounded top and pored underside, but the top soon flattens out, and the pores don’t peel away. Its grey/brown top and white pore surface belie the lovely green that results in the dyepot—these are also processed at pH10). These can be dried, but they should be kept well away from squirrels. (I had an unpleasant experience in that regard, which I recounted in a somewhat bitter blog post—ironic, as these supposedly edible fungi are much too bitter for the cookpot.)

I used to think the Dermocybes were the holy grail of the rainforest, but I’ve changed my mind. These gorgeous purple toothed fungi are less abundant and provide a greater thrill upon their discovery. And they give a reliable blue, again when handled carefully. They’re dark enough to be easily missed in the shadowy undergrowth they like to inhabit, but once you see one, look around carefully and you’re likely to find more. These dry well.

The Dermocybes are a special group of Cortinarius that have brightly coloured gills, indicating colour molecules that are only too happy to attach themselves to fibre. These reds and oranges are so strong that a couple of handfuls of this mushroom’s caps will give a generous dyepot that can be used several times before the colour is exhausted. And the nice thing about them is that it takes only fifteen minutes of cooking for the fibre to absorb all the colour it can. Reds in these dyepots are absorbed first; subsequent exhausts yield more orange tones.

I find these growing in moss in our Douglas fir forests, and also in the moss beds that surround arbutus (madrona) trees. In our area they start appearing in mid-October, continuing until early December or the first hard frost.

It can be difficult to recognize these precious fungi at first, as they look like ordinary little brown mushrooms (LBMs) from above, but once you’ve found a few, they’ll start to jump out at you. The gills give them away: look for red, yellow, or gold gills underneath a satiny brown cap with an umbo (a little “nipple” in the centre). The exception to this is C. sanguineus, which has a wine-red cap and stem. (So far I’ve found only three spots where this one grows, and all of them are in deep shade near water.)

One thought on “The Mushrooms”