We’re expecting a bit of snow tonight (a dusting, really), and temperatures are set to drop, so I decided to go out for my annual foray on a nearby moss bluff—several tiers of bluff, actually—where I usually find a few of my Cortinarius dyers. This is part of the “arbutus belt,” a narrow area at a consistent elevation where the conditions are right for the arbutus tree (Arbutus menziesii, also known as madrone). Arbutus wood is iron-hard, and it sheds its paper-like bark each year. These trees resist domestication and are quite picky about where they’ll take root, so I consider myself fortunate to be living among them.

Knowing this hike would involve a bit of a climb, I left Silas, our 12-year-old Golden, behind, as it would have been too much for him. Instead, I invited Rica, our Border Collie mutt, to join me—nothing is too much for her!

I could hear the dermocybes calling, and sure enough, it wasn’t long before I found these little guys camouflaged among the dried leaves.

We clambered over moss-covered rocks, sweeping back and forth across the bluffs, and soon my little brown paper bag was full, of both the yellow-gilled and red-gilled beauties, and I had to start on another bag.

Along the way I found a few clumps of orange coral, Ramaria gelatinosum, which only added to the excitement. 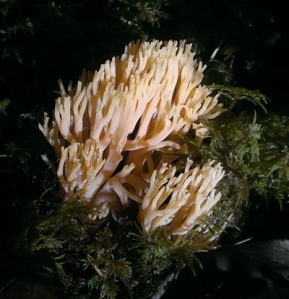 It’s probably just as well Silas wasn’t along with us, as he would have been unable to tear himself away from these two discoveries: bones cleaned down to the bone (probably by coyotes) and a nice pile of elk poo (recognized by its large size and the distinctive “thumbprint” in each nugget).

After two hours of foraging, it was time to return home. But wait—Rica found some excitement of her own! The squirrel teased and chattered and eventually made its way down the other side of the tree. Rica’s doggy brain forgot about it immediately, happy to move on to other discoveries.

A perfect afternoon, evidenced by this view of Mixal Lake on our way down to the road and back home.

And look what’s in the dehydrator at this very moment: