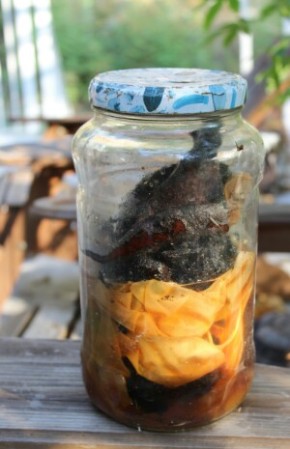 After a very long, dry summer, we began to despair of having any sort of mushroom season at all. The Phaeolus schweinitzii (dyer’s polypore) appeared in their usual abundant numbers, so at least I’m guaranteed of having lots of gold/green/brown dyepots. Some of the other standbys turned up later than usual and in smaller numbers than usual—more about them in future posts—but for now I’m revelling in golds.

Here’s a silk scarf that’s been sitting with some chunks of Phaelous for a couple of months now—”solar” dyeing at its best, even in the midst of a foggy autumn.

4 thoughts on “What a long, strange year it’s been!”