After a break of several months—not a bad thing—I’m back in my cottage studio and the dyepots are heating up.

I’ve been playing with ecoprinting and decided it was time to commit to a finished piece rather than continue making small samples. So I retrieved from my stash an alum-mordanted wool/silk square, large enough to be a pocket square, and made a bundle using leaves collected on my daily dog walk: lupine, maple, blackberry, ginko, and something I have yet to identify. I had a little net bag of Lobster parings (Hypomyces lactilfuorum) left over from a workshop in April, so I decided to simmer them while at the same time (with the help of a wire sieve placed over the dyepot) steaming the wool/silk bundle.

I let the little dyepot simmer (Lobsters can handle boiling) outside. When I went to check it after half an hour or so, I found the dyebath bubbles reaching up into the sieve. The colour on the fabric looked pretty intense, so I turned the bundles over to expose another side to the steam.

This is what resulted. 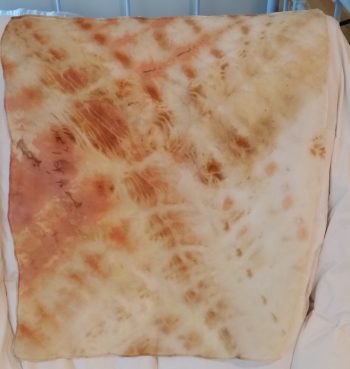 I was surprised by the intensity of the color, and disappointed to see only the merest suggestion of an ecoprint. That particular fabric is woven fairly loosely, which I believe is more difficulty to print on.

My freezer has been home to masses of frozen Ramaria collected for the Fungi and Fibre Symposium dyepots, but I wanted to be sure it would give some good colour after being frozen for nine months. My earlier experiments with the frozen version of this mushroom resulted in a decent purple, but I didn’t want to take a chance on seeing a dozen international visitors hovering over a dyepot, watching and waiting for purple. And ending up with a blah beige.

So this lovely orange coral appeared in my Back Forty at the perfect time, when plans for the event are ticking along nicely and when my hands really needed to get into some dyepots. The coral came home with me and went straight into my sample dyepot along with a few strands of iron-mordanted yarn.

The results amounted to a revelation. I recant my previous musings about frozen Ramaria and about keeping the dyepot temperature on the low side. Here’s what happened (laid out on grey cardstock—the colours are true, at least on my screen) :

First, it doesn’t appear that the purple from Ramaria is quite so finicky as the other purple-bestowing mushrooms when it comes to temperatures (specifically Tapinella atrotomentosa and Omphalotus olivascens, which need to be watched carefully and pulled at ~160° F). Clearly the dyebath shouldn’t be allowed to reach boiling, but 170° F was the optimum for the first two sets of samples.

My second discovery: freezing Ramaria works if done for a short time but not for the nine months I subjected my stash to. So I returned the Symposium orange coral to the forest floor, and now I’m hoping for an outstanding harvest this year so our registrants won’t be disappointed.

At the same time as I found the Ramaria, I also found Clavulina coralloides in various stages of infection with Helminthosphaeria clavariarum, a fungus that routinely parasitizes this little coral.

Since I was planning on doing some sampling anyway, I decided to try this one too—with the darkest of the infected coral—on the off chance the deep purple of the parasite might translate into the dyepot, again with an iron-mordanted test strand. 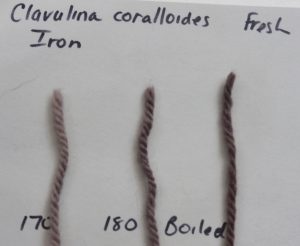 More grey than purple, but clearly darker with more heat. Worth playing with some more? I don’t think so.

If it seems like it’s been a while since I last posted . . . it has. Despite the dry summer, the mushrooms are coming out now, so most days we’re out scouting our favourite spots.

We discovered one particular patch of Lobsters (Hypomyces lactifluorum) two years ago and hadn’t been back since, but we decided to check it out this morning. Strangely enough, there were very few other mushrooms around, but our patch didn’t disappoint; we came home with a good ten pounds of the beauties, most of them already breaking apart. But that doesn’t matter to me—I’ll strip the coloured bits no matter how fragile or smelly their hosts might be.

And it was interesting to see the various stages of progression: from an uninfected Russula brevipes to one starting to show a bit of colour, to one in the full stages of orange.

My evening work is cut out for me—paring mushrooms! Now we’re certain to have a strong Lobster dyepot for next year’s Fungi & Fibre Symposium. (Have you marked your calendars yet? October 17-22, 2016, Madeira Park, BC.)

Doesn’t the air smell wonderfully fresh after a new rain following weeks of dry weather? That’s called petrichor, and I filled my lungs with it this morning after hearing the welcome sounds of rain on the roof overnight. We didn’t get enough moisture to make much difference to the parched soil and dry moss, but maybe the mycelia below soil level were also heartened by the promise of the rainy season’s return.

Now I’m spinning up what bits of yarn are left from last year’s dyepots, and finally decided to do something with the Pycnoporellus roving I showed in my previous post. I needed to pop up the colour a bit, so decided to use a bright piece of wool that came out of a Cortinarius cinnamomeus dyepot, along with a vibrant chunk of synthetic fibre that went through the dyebath at the same time (the two sections on the far left).

It didn’t take much time to run it all through my handcarders, then I spun two strands of thick-and-thin, to give the skein some texture. I normally don’t like orange—probably because I can’t wear anything resembling that colour—but blending it with the warm peach resulted in another skein I love to fondle.

Now I’ll take any amount of petrichor that wants to come our way, as long as it means some real rain in the near future.

Like the rest of North America’s West Coast, we’ve had an exceptionally dry spring and early summer. Flowers, birds, berries—they’ve all been a few weeks early this year, and everything is scarily dry.

I’ve been away for three weeks and on my return was hesitant to go out into my Back 40, knowing the moss would be crunchy and the ground dry. But I needed my forest therapy (after a glorious but noisy and crowded holiday in Sicily), so out I went with Rica, my fantastic flying puppy.

And what should I find, in a spot where I’ve never found this mushroom before:

(I did find a few of these Velvet Pax at this time last year, but we’d had a cool, rainy June. I certainly didn’t expect to find it in our current conditions. Usually they appear in late July through September.)

This was on its own in open sun (growing out of wood under the moss), already getting parched. Down the hill, at the base of a shady stump where I’ve found these mushrooms in previous years, was another clump that still looked as if they had some growing to do, so I’ll keep an eye on them for now. My other usual spots haven’t revealed anything yet.

Along the trail, farther along, is my nurse log for Pycnoporellus fulgens. Even though I don’t get a striking colour from these, and I usually need two years’ worth of collecting to make one dyepot, I’m always happy to see them, as they are (usually) the first harbingers of mushroom season.

I’ve never seen this fungus in such a huge cluster before—this one is about four inches wide. Usually it appears as a single fan, perhaps in tiers (see my post from 2009 when I first realized what it was). As always, I’ll leave this to dry over the summer and start a new stash until I have enough for another pastel dyepot.

I feel mushroom fever creeping into my brain!

I feel honoured and privileged to have been invited to teach a workshop on mushroom dyeing at Maiwa this year.

Maiwa (pronounced MAY-wah) supports traditional craft, through an ethical business model, in the trade of embroidered, block-printed, handwoven, and naturally dyed textiles (mainly with India, but also with several other areas). Their dedicated staff seek out quality workmanship, and they do what they can to educate the purchasing public about the cultures, co-operatives, and lives of the artisans.

Every year, beginning in September and carrying on into November, Maiwa holds its Textile Symposium, with lectures, exhibitions, seminars, and workshops covering all manner of topics related to the fibre arts. Their teaching facilities are first-rate (Classroom space! Dyepots of all sizes! Heated drying racks! Extractors to remove smelly fumes! Assistants!) and their staff exceptionally helpful and efficient.

If you get a chance, visit one of their locations in Vancouver: their main store and Maiwa Supply, both on Granville Island, and Maiwa East at 1310 Odlum. Not only will you find garments, fabrics, and accessories, it’s also the go-to place for dyeing supplies and information. The shop at Maiwa East is filled with furniture unlike anything you’ll find in a big box. You can purchase documentary DVDs through their website and download podcasts of many of their symposium presentations.

My dear friend and wonderfully creative fibre artist behind the Ruby Slippers blog has made some beautiful fabric pieces by eco-dyeing—rolling flowers and leaves into little bundles, then steaming them. She has to leave these bundles alone for several weeks to ensure that the colours are imprinted, and when she can finally open them, the results are marvelous.

Eco-dyeing with mushrooms presents its own challenges, but when I noticed a layer of “dust” in the bottom of a box holding a bunch of dried Dyer’s Polypore (Phaeolus schweinitzii), a tiny light bulb sparked an idea. I dyed some silk scarves in a Phaeolus dyepot and removed them before the colour became too intense. Then I put them immediately into a pot of simmering water—a stop bath—to set the colour. Then I got to play, and here’s what happened.

I scooped up a few handfuls of Phaeolus bits—as the fungus dries, it seems to shed its layer of pores, which have turned dark brown, but I reasoned these bits would still contain pigment.

My search for something handy to use as a “stencil” took me to the kitchen utensil drawer. My dearest, who does all the cooking, probably wouldn’t have condoned my taking this up to my studio to be covered in inedible fungus dust, but in matters of mushroom dyeing, it’s always safer to follow the “ask forgiveness” rule. I sprinkled the bits into the slots with a liberal hand, then gave the whole thing a good spritz of water to keep everything in place. With care, I lifted the slotted spoon off the fabric, pleased to see that the design had stayed in place. I soon discovered, though, that the mushroom bits had minds of their own and were scattering themselves outside the design area. So I went along and sprinkled bits over the scarf’s surface, hoping for a speckled background.

I’d laid the scarf out on a long piece of plastic (cut from one of those ubiquitous shopping bags that I swear procreate under the kitchen sink) and began rolling, taking care not to disturb my designs. 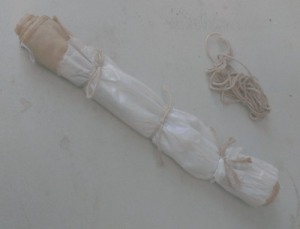 Then it was a simple matter of tying the scarf tightly in three places . . . 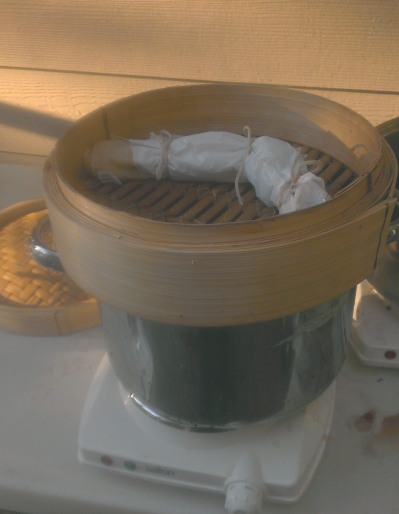 . . . and putting it into a bamboo steamer where it steamed for thirty minutes one day and thirty minutes the next. (I did that because of timing—ordinarily I would have steamed it for an hour the first time.)

I decided not to wait three weeks to see the results. I figured the bits of  Phaeolus would impart their colour quickly and permanently . . .